It looks like the Burger King crown is making a comeback. I can't say I ever felt like a king wearing one (at any age), but I sure felt something, so I'm glad to see it back in full swing. I remember the local BK used to have them out on the tables and in between booths, so then just as today, any kid could just wander in and get one... particularly if your parents just went through the drive-thru and they forgot to include the damn crown! The nerve of those drive-thru people.

I did have a few complaints. These paper crowns just never, ever, fit your head, no matter what "size" you made them, and they dug into your ears something fierce. But I don't know, perhaps I did feel like I was having it my way when I got my (two) hands around my condiment-free, pickle-free, lettuce-free, burger slab on two buns. And perhaps I really was king and everyone else's crown was just a flimsy paper imitation. I'd like to think so now. 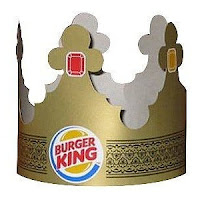 Speaking of which, while I may have been king of scarfing down fast food, I sure wasn't king of holding on to those so-called "crown jewels." I probably had about 100 meals at BK in my early life, and probably about 50 of them I was "king" of... so where the heck did all those crowns go, and why did I have to keep getting coronated every time I had a hankering for fries? Wasn't I already king, or did my kingdom just stop at the boundary of the paper wrapper?

In any case, did the crown really ever go away? That would've been as depressing as the demise of the Burger King Kids Club cult... (world domination was in our grasp and the grups go take it away?) ...the nerve of those grups!
Email ThisBlogThis!Share to TwitterShare to FacebookShare to Pinterest 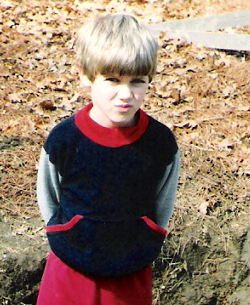 Hey guys, can I play?

Here I will post my (rather peculiar) 90's boyhood thoughts and stories straight from that freaky mind to your squarish screen, for your enjoyment and/or repulsion.

Random 8yo Me Thought... 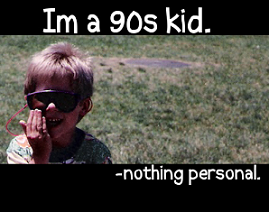